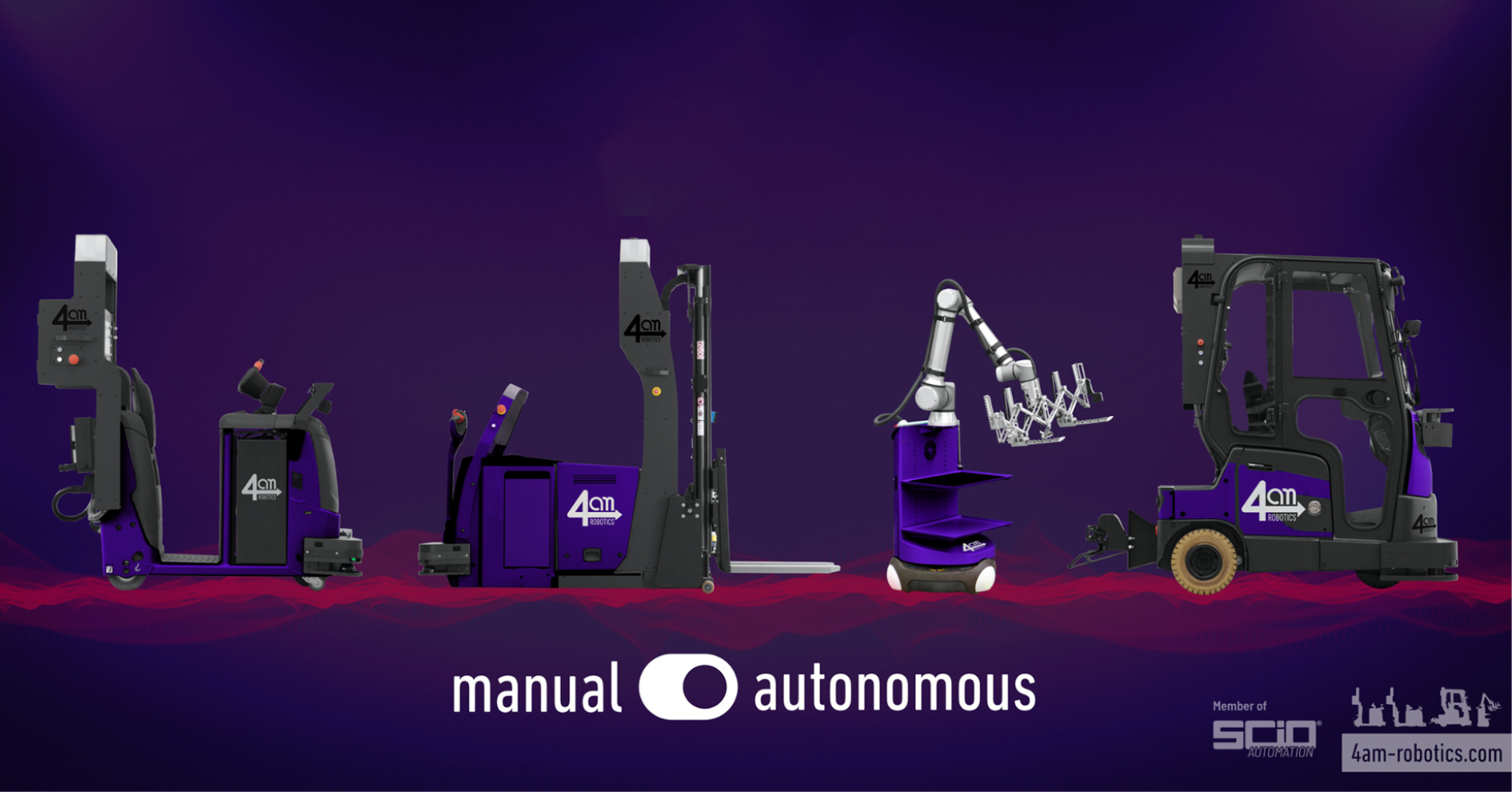 Full customer integration and using existing industrial components have been the recipe for success of SCIO's Autonomous Mobile Robots from the very beginning. From the first tugger train, to the mobile cobot, and to the 4am Robotics product brand in 2022. We’re now going to take a deep dive into the history of AMR developments at our group companies Schiller Automatisierungstechnik and Mojin Robotics, as well as getting their views on where the sector is heading.

In search of a flexible autonomous solution for internal transport chains, a major automotive manufacturer turned to Schiller in 2015. This resulted in Schiller, a team that already had three decades of experience in intralogistics automation under their belt, being awarded a pilot project for a tugger train that was able to move autonomously.

Their approach for designing this autonomous tugger train was a customized build that could be seamlessly integrated into the client’s existing process environment. This idea made Schiller stand out from their competitors right from the word go.

“We ran out of room for development testing pretty quickly at our Lower Bavarian site in Osterhofen, so we rented a hall from a local farmer and did our initial setup using two sets of beer tables and laptops. Then, our small team was really able to get their teeth into the nitty-gritty of development”, said Andreas Vogl - who was part of the team at the time, and he is now head of development for the AMR unit at Schiller.

The project became a huge success, as Schiller's solution gave the client flexibility to convert their manual tugger trains that were already up and running in production into autonomous mobile vehicles using a conversion kit. 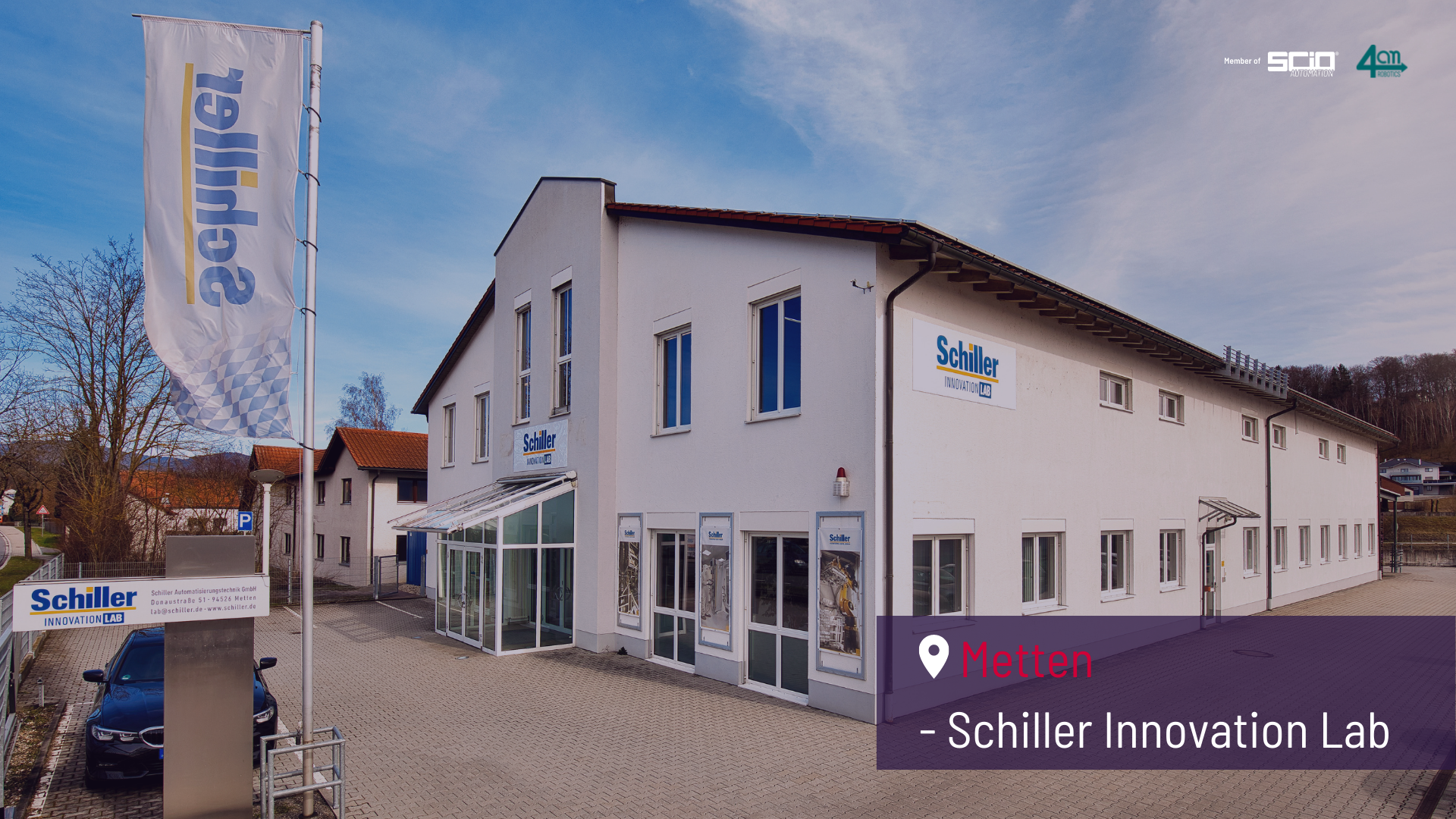 "A crucial step for our AMR projects was naming our vehicles. This gave the client's day-to-day work with the tugger trains a real personal feel, and the initial skepticism towards the new technologies evaporated," said Andreas Vogl, Head of Mobile Robotics Development at Schiller.

An outdoor solution for the tugger train, which can respond to disruptive factors related to weather and changing traffic conditions, was also on the horizon.

A short time later - in January 2019 - Schiller became part of SCIO, and it became abundantly clear that Schiller's AMR innovations are a key pillar of the SCIO portfolio - after all, they are the living embodiment of the link between logistics and production processes. 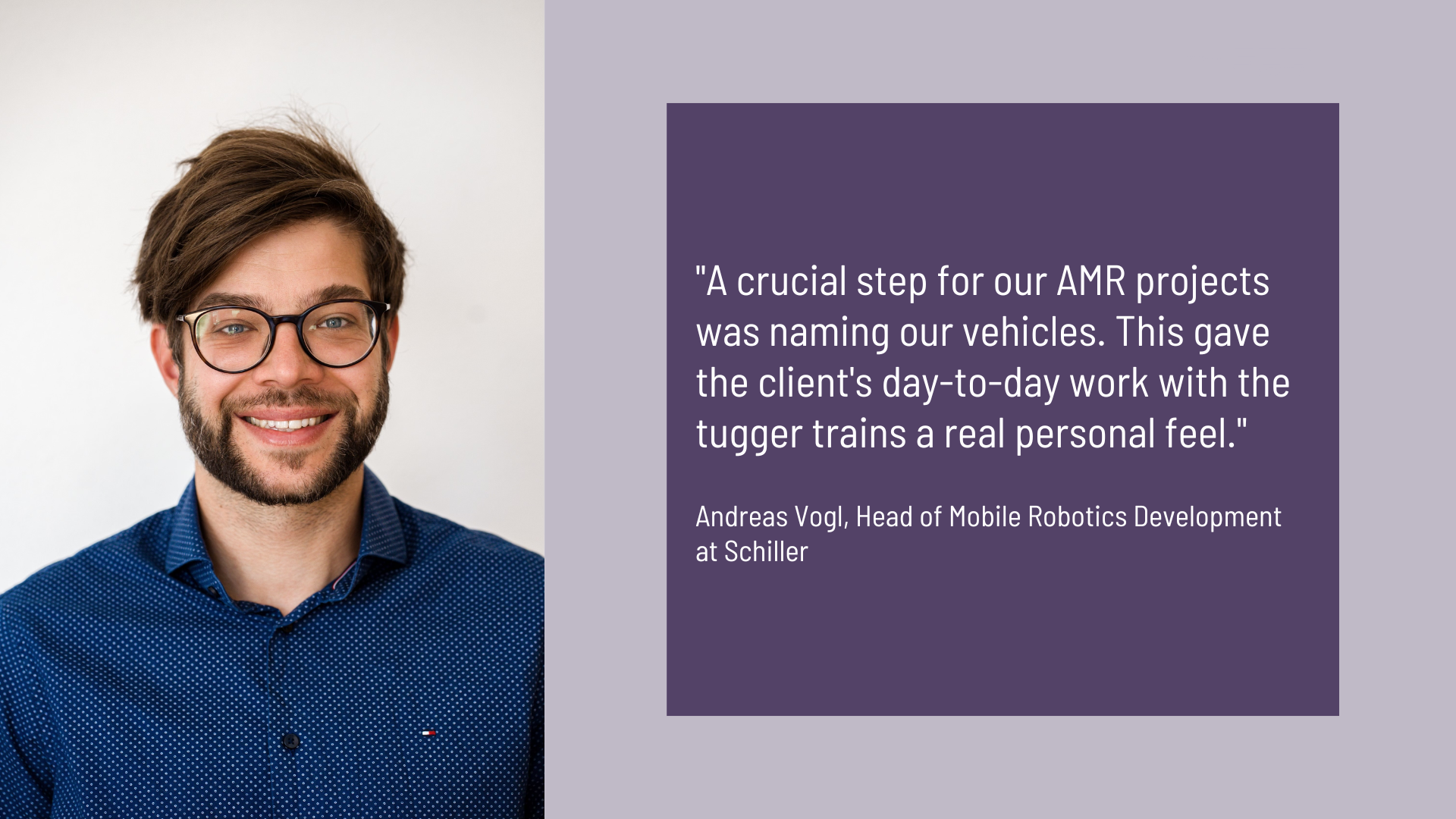 Mojin's developments - Decades of research with numerous use cases

Mojin Robotics was founded in 2015 from a three-person research team at the Fraunhofer Institute for Manufacturing Engineering and Automation. The first mobile service robot, Care-O-bot®, was unveiled here as early as 1998, which was already able to navigate freely. The fourth generation of the cobot allowed developers to quickly explore new fields of application after Mojin was founded. Service robots, called Paul and Eva were used, for example, to assist retail customers or museum visitors. 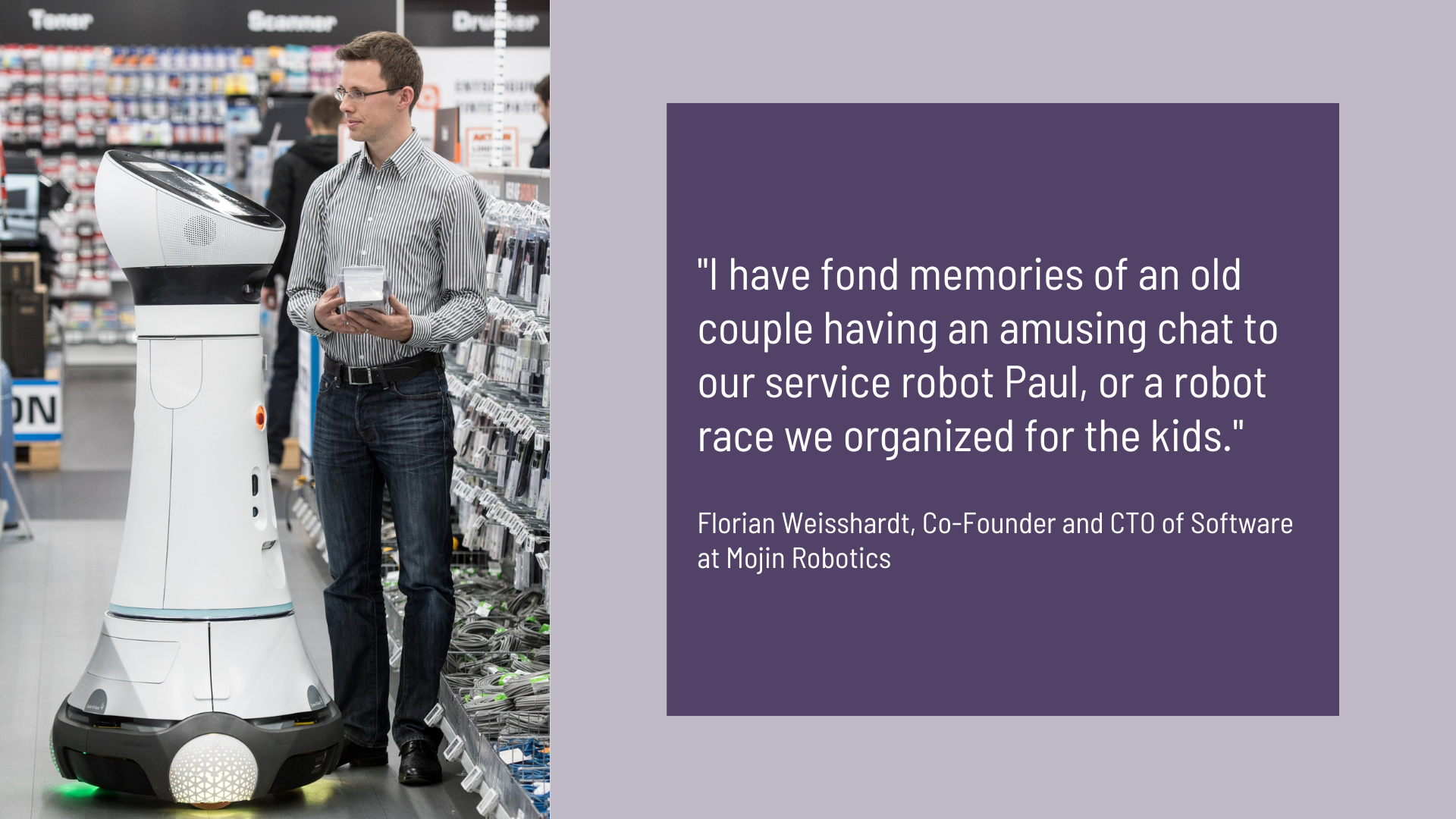 “It's really great when we can inspire young and old alike to find out more about mobile robotics. I have fond memories of an old couple having an amusing chat to our service robot Paul, or a robot race we organized for the kids." 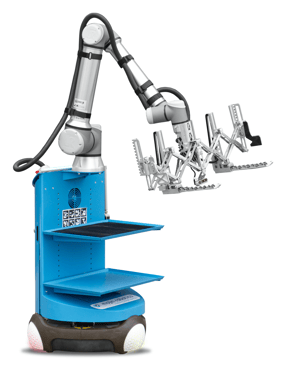 The team were quickly able to develop industrial use cases to use the service robot as an autonomous mobile cobot.

The mobile cobot was able to pass an initial test for handling crates at a logistics center of an automotive manufacturer in Germersheim in 2019.  It proved itself to be particularly adept at transport and handling in tight spaces, such as in corridors just a meter wide where there was very little room to work, while moving crates up to 60 cm in width.

In 2020, Mojin Robotics became part of Schiller, so it’s now a corporate brand of the SCIO Group. (Click here to read more)

From the beginning, the aim of both companies was to offer internal transport routes, from goods delivery and the warehouse to the assembly line, with a common product range. In terms of interaction, the mobile cobot retrieves small load carriers from narrow shelf aisles and loads the tugger train. It can then transport the parts efficiently and flexibly over long distances to the desired locations. In the same way, it can, for example, remove carriers from the tugger train and distribute them to shelves on the production line. This creates a harmonious chain of handling and transport solutions. For Mojin, being merged into the versatile SCIO Group has given them access to new client projects where the autonomous mobile cobot can be used and further refined. As far as Mojin is concerned, this also means focusing on industrial application fields.

"Although it may seem that Mojin’s mobile cobot and Schiller’s tugger train operate in two completely different areas at first glance, we’ve recognized that the fundamental technology overlaps to a large extent, and we can use synergies to make things even better," said Florian Weisshardt, Co-Founder and CTO of Software at Mojin Robotics.

The two companies’ development teams have grown ever closer since the merger. They are currently working on implementing a uniform software architecture using the Robot Operating System (ROS) and using it as a unified AMR software platform. This will allow different types of vehicles to use the same software components, and client-specific projects will be able to be worked on more efficiently over time.

With 4am Robotics, the group companies are facing the future together

In 2022, Schiller and Mojin took things a step further, and established a joint product brand: 4am Robotics. (Click here to read the report)

"We're seeing a lot of new AMR solutions popping up among our competitors right now. We know from our customer feedback that we can offer the most flexibility and the widest range of container sizes and weights. Customized solutions for our clients will always be our top priority for future projects," said Schiller’s Andreas Vogl.

This is also evident in one of 4am Robotics’ current projects: developing an autonomous forklift. There has already been great deal of positive feedback from clients, and progress was made so quickly that they were able to conduct their first autonomous test drive in a real production environment in a matter of months. The development team is now prioritizing further development of the autonomous forklift up to the end of 2022, which means they should be ready to work on client projects by early 2023. The development pathway includes making the systems more user-friendly, and ensuring that the user interface appears uniform. They also plan to take on new development projects in the future in a more cost-effective way by using the modular AMR software platform. 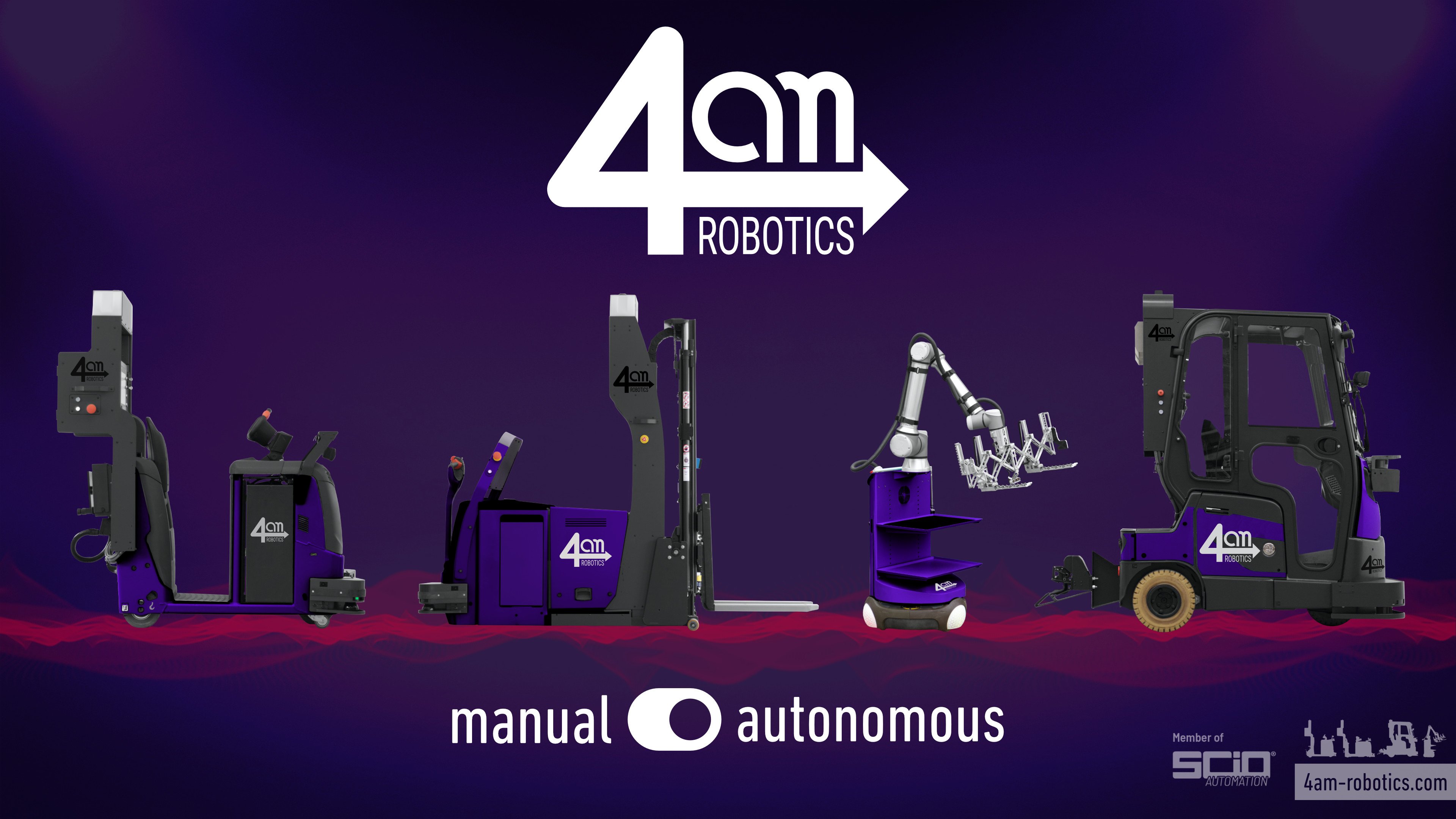 Further expansion is planned for the mobile cobot while client projects are ongoing. A new base gives it greater stability and enables heavy loads to be handled more safely. The grippers are also constantly being adjusted to meet customized client requirements; projects are currently underway for loading and unloading assembly racks and roller conveyors, to name just a few.

"The enormous success of autonomous mobile robotics is leading to more and more vehicles in general, and a greater variety of vehicle types coming into circulation. Effective concepts are also needed to coordinate heterogenous fleets that are in operation, alongside innovative ideas for developing each vehicle individually. I can see quite a few challenges cropping up, such as in decentralized fleet and traffic management as well as in awarding contracts," said Mojin’s Florian Weisshardt.

Students from Germany, Austria and Switzerland will face these challenges head on in the coming months. The SCIO Innovation Challenge started at the beginning of July, which is supported by 4am Robotics. The competition gives students the opportunity to submit their own innovative concepts for AMR development. All finalists will then be supported by our 4am Robotics experts to refine them. Find out more at: https://www.scio-automation.com/innovation-challenge

Stay up to date with our latest news and articles about innovative automation solutions.